​
​Save the Wilder Homestead Barn!

BUCKLAND — Fundraising efforts are underway for the proposed reconstruction and restoration of the historic barn on the property of the 1775 Wilder Homestead.

State Sen. Adam Hinds, D-Pittsfield, hosted a small event at the Wilder Homestead on Route 112 on Wednesday, where he formally announced the allocation of $75,000, to be combined with private donations, toward the restoration of the historic barn.
"Our small contribution is just that — a small piece of a big project, with a lot of generous folks helping out," Hinds said in front of a small group of Buckland Historical Society members and project donors. "I just want to make sure we are continuing to bring attention to this project."

Michael McCusker, president of the Buckland Historical Society, said the entire restoration project — which will help address issues with the barn's roof, foundation, siding and interior timber frame, as well as improve the overall weatherization to allow for year-round use — is estimated to cost about $500,000.  The restoration, McCusker explained, would allow for the continuation and expansion of workshops and classes. In particular, the interior of the barn features antique looms used for teaching and production.

The $75,000 grant, which comes from American Rescue Plan Act funding, is expected to be part of the required match for a grant from the Massachusetts Cultural Council the society is in the process of applying for.  "We're ramping up for that," McCusker said, noting the maximum grant award would be $200,000.  McCusker said he expects to hear about whether the Historical Society received the grant in May, which will come shortly after the society launches its public campaign to raise the rest of the matching funds.

To date, money has been raised through membership donations as part of the campaign's "quiet phase."  Capital Fund Chair Sue Samoriski said she wanted to thank donors for their pledges, donations and matches.  "Everybody has played an important role," Samoriski said. "I've worked on several capital campaigns in my life and this is the most exciting. This is something that is generating a lot of historical and educational activities, opportunities for the community and for local education."  She told Hinds that the $75,000 grant was a "cornerstone" to the society reaching its goal.  "We're so grateful for Sen. Hinds and the state money that is coming this way," Samoriski said. "We appreciate your local support and the support for the state, and all you're doing for this community." Hinds, who is running for lieutenant governor, said between the historic and agricultural significance of the Wilder Homestead, as well as the educational element and potential tourism draw, it was a "no brainer" for him to offer his support for the cause.

"There's something about spending my entire life driving by this building that really pulls at your heartstrings," the Buckland native added. "Of course, we're going to make sure every aspect of this property is where it needs to be."
​
Following his stop in Buckland, Hinds went to the Hilltown Mobile Market on Sawyer Road in Worthington to announce a $50,000 allotment of ARPA funds, according to Hinds' office. The grant aims to improve food access for residents and support western Massachusetts farmers. Reporter Mary Byrne can be reached at mbyrne@recorder.com or 413-930-4429. Twitter: @MaryEByrne.

Highlights of the Wilder Homestead

Weaving in Our History
The barn has been the focal point for the Buckland weavers, a longstanding local tradition of Buckland women who keep alive the handspun fiber art. Our long-term goal is to enhance the weaving space where we produce rag rugs on our antique barn looms. Restoration of the structure of the barn will help us continue this living history.
Public Education
Every year the Buckland Historical Society works with the Mohawk Trail Regional School District to provide learning opportunities about local history in and around the barn. A hands-on educational Colonial program has been running for more than 25 years at the Wilder Homestead and has served 1,000 elementary students.
The Barn Restoration Project
Today we face a major challenge with the preservation of the barn. With grant support from the Massachusetts Cultural Commission, in 2020 we conducted an architectural study with the assistance of Stevens and Associates from Brattleboro, Vermont. The study identified key deficiencies in the foundation, the siding, and post and beam components that will need to be replaced. Our goal is to raise $150,000 that can be used to match other grant funders to complete the structural restoration.

Report from the barn restoration committee 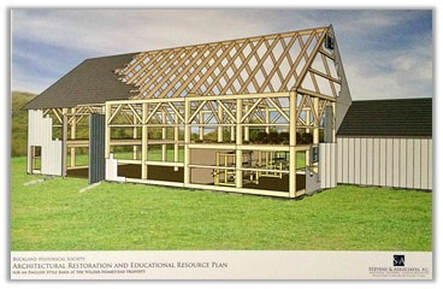 ​The Wilder Homestead Barn, circa 1798, is one of the few surviving English style barns located on a colonial era farm. The Massachusetts Cultural Council matched the funding of a Feasibility Study, supporting the planning work necessary to restore the barn, support the mission of the historical society, and expand programming to the regional and broader community.
​
​With the Mass Cultural Facilities Grant this Feasibility Study was completed in 2021.   Stevens and Associates of Brattleboro, Vermont conducted the architectural study that identified deficiencies in the foundation, the siding, and timber frame components.
​Three site visits and structural inspections were made to assess the condition of the barn to confirm the suitability of lifting the barn in place.  It would then sit on cribbing during the construction of a proper foundation. Disassembly of the barn was considered, although later ruled out, when the structural integrity was determined sufficient to utilize the much less costly lifting in place approach. The lower 12 to 24 inches of the siding are deteriorated where the lack of foundation leaves the boards touching the ground. Virtually all of the base plate timbers have to be replaced, along with many of the lower portions of the posts. With a new concrete foundation, concealed by a fieldstone veneer, the sill plates will be out of the dirt and protected from rot.
The structural assessment report, along with the photographic survey, describes multiple deficiencies requiring attention. Existing heavy timber framing members will be repaired whenever possible. Hemlock harvested on site and milled locally, will be utilized for replacement timbers. Traditional mortise and tendon joinery will be used where posts or beams are replaced. Temporary shoring now in place at the hayloft and an area of roof framing failure will be replaced when the original post and beam structure is restored.
Maintaining the historical integrity of the barn will be a primary objective while concurrently functional improvements and handicapped accessibility will be provided. The uneven asphalt floor will be replaced with wide pine planks cut from trees on the Wilder Homestead hillside.
Antique barn looms, similar to the ones used by Eleanor Wilder Clark and “The Buckland Weavers,” will remain on display and in use at the weaving room.  The framing of the ceiling in the weaving room will be raised slightly to increase ceiling height, and will be strengthened to support loads of the loft above.  The weaving room will be finished with barn boards and a wide plank floor.
Many thanks are due to Greenfield Savings Bank, Greenfield Northampton Cooperative Bank, and Peoples United Bank for their support to the successful completion of our Feasibility Study.

​Applying for A Reconstruction Grant

Following the attainment of the Feasibility Study, we are now eligible to apply for a Reconstruction Grant under the second phase of support from the Massachusetts Cultural Council.  We hope to be able to raise $150,000 to qualify for a one-to-one match that would fund a reconstruction and preservation project.  We have submitted our Final Application which was due by January 15th.
The Barn Committee and the Trustees are excited to embark on the restoration of our classic 1798 English barn, an extraordinary three bay structure replete with an authentic grain threshing bay and hayloft.   This English style barn is a rare cultural resource that reflects the family subsistence farming and grain threshing practices of that era. 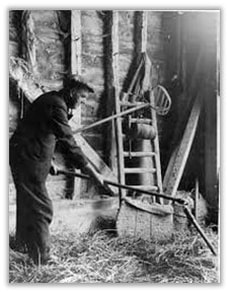 ​Early farmers grew wheat for flour, but the process of turning harvested wheat stalks into edible grain was time consuming.
Threshing is the process used to separate the chaff, the protective covering around the grain, and the kernel of grain used for food, from a plant’s stalk.  The wheat was laid out on the floor of the threshing barn. Next, the farmer with a large flail would swing it down onto the wheat, releasing the grain from the stalks and cracking open the chaff.
Hand threshing was laborious with one bushel of wheat taking an hour.  A quarter of agricultural labor was devoted to threshing.
​Winnowing is the action of separating the grain from the chaff- the inedible covering found on the grain. After flailing the grain, the farmer puts the wheat in the winnowing basket or tray.  ​
​On a breezy day, the threshing barn doors in the eaves side are opened. This allows the wind to blow through and across the threshing floor. Using a winnowing tray, the farmers would toss the mixed chaff and grains repeatedly into the air. The wind would blow the chaff away, as the good kernels of grain fell into the tray. This was a very dirty, dusty job. During the winnowing, boards were placed at the bottom of the open doors to block the wind from blowing away grain that fell to the floor. These were called thresh holds.
Restoration of the English Barn will enable the Society to expand educational programs to the public.  We hope that you will respond enthusiastically to our Capital Campaign and help preserve our iconic Colonial farmscape along the Route 112 Scenic Byway.

Jack Sobon, an architect and builder specializing in timber framed buildings, has come on board as our Project Manager for the Barn resoration!
Buckland Historical Society — Box 88 — Buckland, Massachusetts 01338 — (413) 625-9763 — Copyright © 2019