Buckland Historical Society was incorporated by The Commonwealth of Massachusetts on September 23, 1957 by Fannie S. Kendrick, Ralph W. Wells, Henrietta F. Perchard, Eleanor W. Clark, Ruth K. Roberts, George D. Mirick, Marjorie A. Warfield, Florence W. Haeberle, John M. Eastman, Roswell Miller, Robert J. Haeberle, Maywood F. Miller and Helen C. Wells.
Click here to find out more!
Buckland Historical Society operates 2 buildings:
THE BUCKLAND HISTORICAL SOCIETY MUSEUM - 20 Upper Street, Buckland Center, MA
A former school house which now houses three floors of artifacts and town records.  The school house was built around 1855, with the main floor serving as a school for approximately 100 years. The second floor was used solely for band practice for the first 30 years, and was known as “Band Hall.”  These two floors, and basement level, now offer a glimpse of Buckland's past through our collection of artifacts, memorabilia and displays. Some displays include early kitchen furniture, tools and photographs of local school groups.  Coming soon is a "Caged Man of Buckland" display, hoping to be opened summer of 2022.
Open Houses are second and fourth Sundays of July and August, from 2 to 4.

THE WILDER HOMESTEAD - 129 Ashfield Road, Route 112, Buckland, MA
A furnished 1775 saltbox house with five fireplaces, a 1779 English barn with antique barn loom, and a shoemaker shop.
The home and barn remained in the same family until the 1981 when it was deeded to BHS.  The barn on premises, houses a weaving studio and displays old farming equipment.  A cobbler's shop, which was relocated onto the property, is also on display.   The Homestead Open Houses are the same hours as the museum, or by appointment.  Call 413-625-9763 for further information. The Wilder Homestead 'Colonial Sampler' is held annually on the Sunday of Indigenous Peoples' Day weekend. 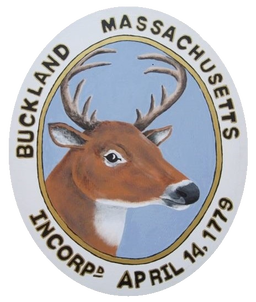 Nestling ‘neath the mountain, in a smiling dale,
Is the Town called Buckland on the Mohawk Trail.
Its gentle smiling beauty makes you think and hush
At its peaceful scenery painters like to brush.

On the banks of the Clesson, Buckland town's own brook,
Many and many an angler has wet his net and hook.
Buckland’s people are friendly, just knock on anyone’s doors,
‘Twas home of Mary Lyon of whom you've heard before.

Down to Deerfield River stretches Buckland Town
Whose waterfalls deliver light to areas all around.
You'd love the smiling valley where nature sat her down,
And made such peaceful beauty to erase your every frown.
And with all the seasons that come and go each year
You will find that beauty stops forever here.

The History of Buckland Volume II, Bicentennial Edition, 1935-1979
Beulah Cross
Located in northwestern Massachusetts, Buckland is 10 miles west of Greenfield, 42 miles northeast of Pittsfield and 105 miles west northwest of Boston. It is bordered on the north by Charlemont, the south by Ashfield and Conway, the west by Hawley and the east by Shelburne.

The Town of Buckland is a small, rural, predominantly agricultural community with a population of approximately 2,000 people. The main employer in Buckland is the Mohawk Trail Regional School. Buckland shares a downtown business district, known as Shelburne Falls, with the Town of Shelburne. The Route 112 corridor bisects the town and is a scenic highway consisting of a number of small farms and open space.
​Originally part of the towns of Charlemont and Ashfield, Buckland’s first settlers arrived in 1742. By 1779, the residents of what is now Buckland found it inconvenient and sometimes dangerous to cross the Deerfield River to attend church, school and town functions in Charlemont and surrounding towns, so they petitioned the General Court for incorporation. The Town of Buckland was incorporated April 14, 1779, and the rest is...history...

We are a group of approximately 100 families from near and far, with an interest and love for Buckland and preservation of it's legacy.  We hope you will consider joining!
Become a Member

Buckland Historical Society Board of Trustees